It is often difficult to determine which people died in a shipping disaster. Their funeral was not recorded in the burial books. No impost (tax) on burial was paid either, so drowning people do not appear in the impost books. By searching in different sources, however, it is possible to check if someone survived the disaster and how he faired in later life.

Pieter Sijmesz Baas came from the Dutch village of Grootebroek and was the first sailmaker aboard the ship. An important function; damaged sails could considerably delay a voyage. A good craftsman could prevent this. He earned 20 guilders a month for his craftsmanship. Pieter Sijmesz Baas survived the disaster, because his name appears in sources after 1715. In the baptismal, marriage, and burial registers of Grootebroek we find more information about the life of Pieter Baas, among others in the books in which the impost on burial was recorded. In October 1720, impost was paid for the funeral of Sijmon Pietersz Seijlemaker, his father was Pieter Sijmonsz Seijlemaker. Then more children followed whose father was Pieter Seijlemaker or Zeijlemaker; in September 1723 a son, in December 1724 an unbaptised child, in February 1727 a daughter, in June 1729 a son and in August 1732 a son. This is most likely Pieter Baas who boarded the unfortunate ship in 1715, but survived the disaster.

In the notarial records you can find documents in which Pieter Baas is mentioned. In February 1736, a deed was drawn up about the rental debt of Pieter Baas also called Pieter Sailmaker. It seems that Pieter Baas used his profession as a surname over the years. This was not unusual before 1811, surnames were not yet recorded officially and could change. Pieter Baas had a rental debt of 145 guilders for the year 1735, as he had rented a piece of grassland in Bovenkarspel. In response to this unpaid debt the landlord had seized a number of Pieter’s cows. We do not know if Pieter settled the debt, but if had not done so within three weeks the cows would have been valued and sold to to pay the debt.

In a notarial deed of 7th May 1737, Pieter and his wife Geert Arenthouts prepared their will Geert was ill; often this was a reason to have a will written. Geert recovered, however, because on August 10th 1744 the couple had another will made. In both deeds the names of their children were not mentioned, but in a number of places children from their marriage are mentioned. It is possible that none of Geert and Pieter’s children survived childhood. At the time of the second deed it was Pieter who was ill. He died not long afterwards. On 17th August 1744 Dirk Aarnoutsz paid 3 guilders impost for Pieter Zeijlemaker ‘s funeral. Geert Arenthouts was buried in Grootebroek on 29th December 1756; in the intervening years she was remarried to Pieter Kreuk. 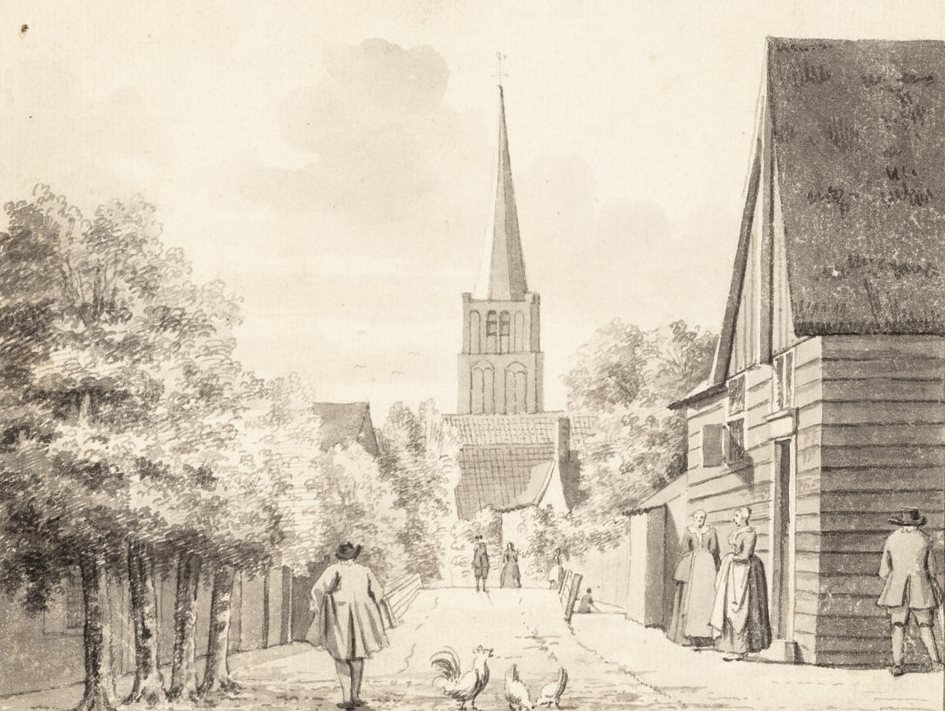 Figure: The village of Grootebroek in the first half of the eighteenth century. (Westfries Archief)

This contribution was made by Sanne Maasbach of the Westfries Archief and published on 14th March 2016 on the website of the archives.