The frigate Huis in Warmelo was commanded by captain François de Groot from Alkmaar. He was appointed as captain by the States General on 21st March 1713, employed by the Admiralty of West Frisia and the Northern Quarter. He was 36 years old at the time. Thanks to the nomination letter from the Admiralty to the States General, we know more about his life and career.

François de Groot was baptised on 21st May 1676 in Alkmaar, the son of Dirk de Groot and Catharina van Steenhuijsen. Father Dirk came from Enkhuizen and settled as a doctor in Alkmaar. In the marriage and baptism registers his first name is Latinised to Theodorus from which status and learning are expressed. Captain François de Groot’s mother was born and raised in Alkmaar. Her father Barthold van Steenhuijsen was an alderman and held various executive positions. Previous generations of the Van Steenhuijsen family may be counted among the founders of the Dutch East India Company (VOC). In 1602, the year in which the VOC was founded, Catharina’s great-grandfather was the director of the Enkhuizen chamber and her grandfather François van Steenhuijsen had served in his younger years as an envoy of the Emperor of Japan. Catharina van Steenhuijsen died in 1683, leaving behind her husband Dirk de Groot and 7 year old François.

In the period 1693-1697, François de Groot was under arms, but whether he served his country in the State army or in the navy is not known. The aforementioned nomination letter does state that he held the rank of lieutenant in recent years. After this period, François de Groot left for East India as a ‘commander of soldiers’. He probably entered into a five-year contract with the Company twice, because he only came home as a lieutenant in February 1713. The five-year period used by the VOC did not include the sailing time to and from the East Indies. Unfortunately the nomination letter does not reveal where François de Groot was posted in the vast working area of the VOC.

Captain at Sea was a position for life. The West Frisian Admiralty had twelve permanent captains who, regardless of whether they were ashore or at sea, received a salary. This did not apply to the other persons on a warship. They were only paid in active employment. The town of Alkmaar was entitled to two of the 12 captain places. When François de Groot was appointed captain in 1713, he took the place of fellow townsman Jan Witkop who had died several months earlier. François de Groot was given command of the frigate Huis te Warmelo in 1715. It was his first and last command as the captain with his VOC background did not survive the accident in the Gulf of Finland. In the same year, the vacant captain’s position was awarded to Jacob van Beijeren from Alkmaar.

Who knows more about François de Groot and his employment with the VOC? 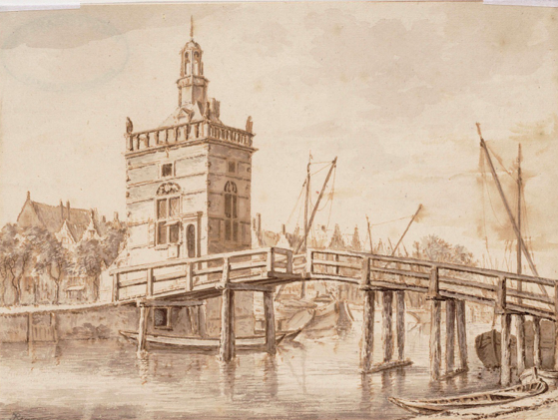 Figure: The characteristic Accijnstoren in Alkmaar at the end of the seventeenth century. According to the marriage register, Dirk de Groot, the father of the captain, lived on the island which could be reached via the wooden bridge on this drawing. (Regionaal Archief Alkmaar)