According to the payment register of the Huis te Warmelo, Cornelis van Herk from Alkmaar held the position of second clerk. The second clerk was the assistant and replacement of the person in charge of the ship’s administration. Around 1715, Cornelis van Herk was a well-known name in Alkmaar. He was vice-principal of the Latin school and a music enthusiast. But are the second clerk of the frigate and the vice-principal from Alkmaar one and the same person?

The cradle of vice-principal Cornelis van Herk stood in Alkmaar where he was baptised on 7th July 1656. His parents Francois Hercke and Wenefrida Buijck were married four months earlier. However, their marriage was short-lived because ‘Weijntje Buijcken’ was buried on 27th July of the same year. In 1663 Cornelis’ father remarried Anna Blauwvoet.
At the age of 22, Cornelis van Herk himself got married. On 13th November 1678 he had banns with Trijntje Backerus, daughter of organ player Hendrik Backerus. At that time Cornelis lived in the Langestraat in Alkmaar. The fact his father and stepmother in 1663 lived there as well suggests Cornelis van Herk grew up in the Langestraat. The Reformed baptismal registers of Alkmaar show seven children from the marriage of Cornelis and Trijntje Backerus. Three of them are mentioned in a will of Cornelis van Herk from 1708: Cornelis, Pieter and Wenefrida Elisabeth.(1) This means another Cornelis van Herk lived in Alkmaar! Cornelis junior was baptised on 8th September 1688 in the Great Church.

Cornelis van Herk senior was appointed vice-principal of the Latin school in 1708. He already had a long track record in education then, because shortly after he married Trijntje Backerus, he was appointed as a teacher in the second school. Almost simultaneously with the appointment as vice-principal, Van Herk also became one of the two permanent organ players of the Chapel Church in Alkmaar.(2) He knew the organ in this church well. Two years earlier Van Herk, who was an ‘enthusiast of the art of playing’, assessed the result of repair work on the instrument. No doubt music played an important role in the life of the vice-principal. He owned several instruments and a collection of music books, both printed and written. By will in 1708 Cornelis van Herk left these possessions to Cornelis junior.

From 1713, vice-principal Cornelis van Herk dealt with creditors. First he was brought to the Alkmaar court as a guarantor of a loan. The judges gave him six weeks to pay the claimant 100 guilders plus overdue interest payments. In 1714 and 1715 the vice-principal was summoned again. This time because of unpaid bills for delivered shop goods. The goods had mainly been purchased by Cornelis junior, but the vice-principal was sued by the creditors as the father and guardian of his son. The last court decision in these cases took place on 21st March 1715. Then a lawyer asked on behalf of Van Herk for a two-month delay, but the judges determined that the defendant had to pay the bill within one month.(3)

Cornelis van Herk junior is mentioned in the Alkmaar court documents of 1714-1715. However traces of him in younger documents, including baptismal, marriage, and burial registers, have not been found. In a notarial deed from 1736, only Pieter and Elisabeth are mentioned as heirs to vice-principal Cornelis van Herk.(4) This makes it plausible that not the vice-principal but his son Cornelis junior served as second clerk of the Huis te Warmelo. The young man from Alkmaar must have been a victim of the accident in the Gulf of Finland.
In 1728, Cornelis senior was given a final resting place in Beverwijk, the place of origin of his father Francois. At the urging of the Alkmaar town council he had to give up the position of vice-principal ten years earlier. But he played the organ of the Chapel Church until his death. 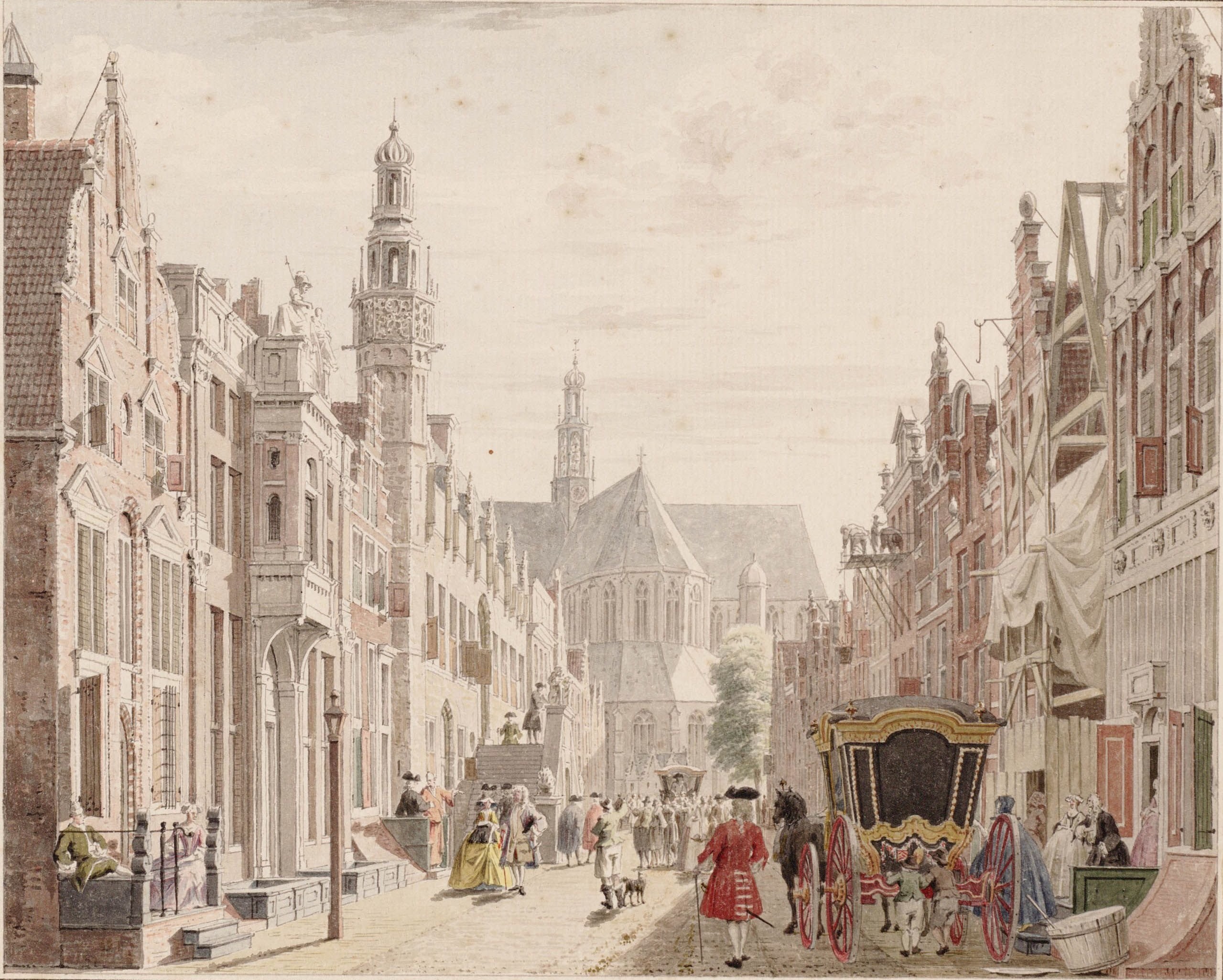 Figure: The Langestraat in the mid-eighteenth century. On the left the town hall and in the background the Great Church of Alkmaar. (Noord-Hollands Archief)