On 6th June 1715, the frigate Huis te Warmelo reached the entrance of the Sound with 200 merchantmen and 11 other Dutch warships. The ships had to sail through this narrow passage between Denmark and Sweden to reach their destinations in the Baltic Sea region. At Helsingør the convoy anchored so the skippers could pay the Danish toll ashore.

The toll rate was determined by the ship’s cargo. Danish toll officials did not come on board to check the cargo. Showing the freight documents in the toll house of Helsingør was good enough. All rules and rates of the Sound Toll were established in a treaty between Denmark and the Netherlands from 1701. This ‘treaty for the tolls in the Orisont and Norway’ was based on an older agreement: the Kristianopel treaty of 1645. The toll rates agreed at that time still applied in the early eighteenth century.
For each ship’s passage, toll officials recorded the date, name and place of residence of the skipper, port of departure and destination, the cargo and toll. From the period 1497-1857, data has been preserved from approximately 1.8 million passages. The original toll registers are held by the Danish National Archives. Thanks to the Sound Toll Registers Online project, these are digitized and searchable online.

Where is the Huis te Warmelo?

The Sound Toll registers give a pertinent and detailed picture of the Dutch convoy in 1715. On Friday 7th June, Danish toll officials handled 151 ships, almost 10% of the total number of ship passages in that year. Another 50 ships followed the next day. The vast majority of the convoy’s merchantmen came fromt Amsterdam: 136. Dozens of other skippers had already started their journey in Setubal, Portugal. The main cargo for which tolls had to be paid was salt. In addition, the ships brought wine, brandy, tobacco and other merchandise to the Baltic.
The Huis te Warmelo is missing from the Sound Toll registers. Warships did not carry merchandise and therefore owed no toll to the Danish king. The bilateral treaty from 1701 contains some distinctive rules for warships. Danish waters were open to Dutch warships at all times and vice versa. However, there was a duty to report and a maximum of six ships were allowed at one place simultaneously. Dispatching a larger squadron required prior permission from the highest national authority. Warships were to remain ‘quiet and gentle’ in the ally’s waters.

On Monday 10th June 1715, it became even busier at the entrance of the Sound. At the end of a cloudy and rainy day, a British convoy of 100 merchantmen and 20 warships arrived at Helsingør roads. Here they joined the Dutch warships and ‘a great fleet of marchant ships.’(1) The British and Dutch would operate together in the Baltic to protect their trading interests against Swedish corsairs and warships. On 11th June, most English skippers paid their toll and the flag officers of both nations consulted on the warship Cumberland, where they decided to sail further south at the earliest opportunity. The next stop was the Bay of Køge, beyond Copenhagen.(2) From 13th to 17th June, the bay was occupied by the complete Anglo-Dutch convoy: 32 warships and 300 merchantmen with many thousands of sailors. In changeable weather conditions, the stop was used to gather information about the Swedish war fleet and to instruct all skippers and captains. On Monday morning, 17th June, the ships raised their anchor and the convoy entered the Baltic Sea.

Look here for the 1701 treaty between the Netherlands and Denmark. 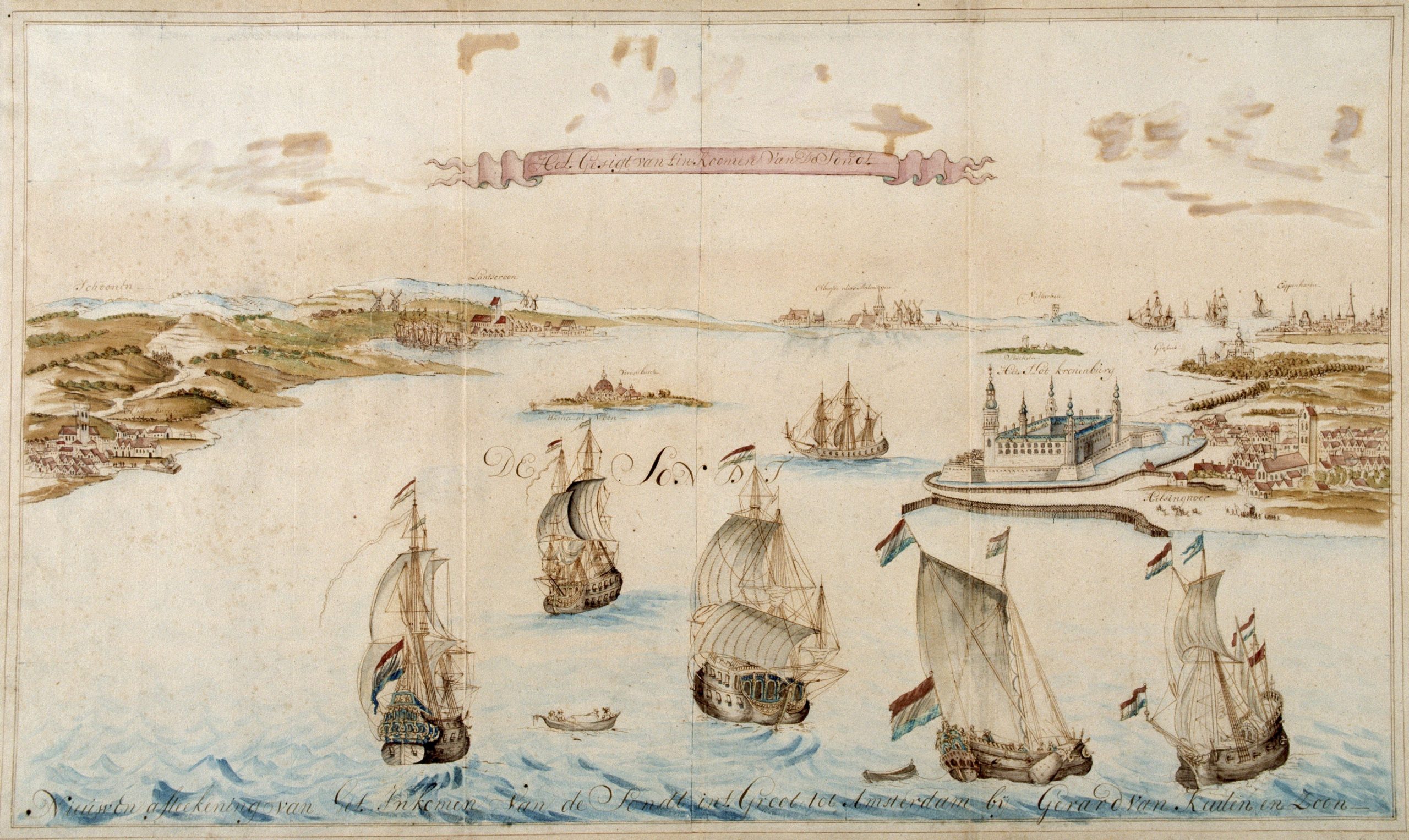 Figure: The Sound in 1726, seen to the south. Helsingør and Kronborg Castle on the right in the foreground and the Swedish coast on the left. (Het Scheepvaartmuseum)