An orphan from Friesland

Wobbe Benedictus was one of the 41 Frisian sailors on board the frigate Huis te Warmelo. In the payment register, he is recorded as coming from the town of Franeker. The name of this crew member is not very common. Searching the Internet led to records of a boy named Wobbe Benedictus in the Burger Orphanage in Leeuwarden, capital of the Dutch province of Friesland.(1) Were this orphan from Friesland and the crew member one and the same person?

The payment register of the Huis te Warmelo contains an important clue to the identity of Wobbe Benedictus. According to the ship’s records the crew member’s remaining wages were paid to his mother Antje Hendriks.(2) This means that Wobbe Benedictus could not have been a full orphan as his mother was still alive at the time he signed on.
To find out more about the orphan, I visited the Leeuwarden Historical Centre. This institution features the town history and contains the town’s archives. It manages, among other things, the archives of the Burger Orphanage. In name lists of orphans, admitted since the middle of the seventeenth century, I quickly found the name Wobbe Benedictus.
The name lists show that Wobbe, aged 10, and his two-year-older brother Willem were admitted simultaneously to the orphanage in 1701. The names of boys’ parents are also listed: Benedictus Piers and … Antje Hendriks.(3) It can therefore be concluded that the sailor Wobbe Benedictus was indeed former resident of the Burger Orphanage of Leeuwarden.

The name lists of the orphanage also provide new insights into Wobbe’s possible birthplace. It turns out he was not from Franeker. Willem and Wobbe were two children from Harlingen, the main harbour town of Friesland. Why the payment register of the Huis te Warmelo mentions another place of origin is not known. It is possible that the sailor lived in Franeker when he signed up to serve on the Huis te Warmelo.
The boys’ parents Benedictus and Antje were married in their home town of Harlingen on 27th December 1674.The baptismal registers of the Reformed Church of Harlingen show that Willem and Wobbe were not their only children. Between 1676 and 1693, Benedictus and Antje had six children baptised.(4) The two eldest sons, Pier and Hendrik, will have been named after their grandfathers. Willem and Wobbe were the fourth and fifth child respectively. Wobbe Benedictus was baptised on 26th March 1690 and must therefore have been 25 years old when he sailed out with the Huis te Warmelo.
Benedictus Piers passed away in 1701, which is probably the reason why his two youngest children ended up in the orphanage.

The admission of Willem and Wobbe Benedictus to the Burger Orphanage in Leeuwarden is remarkable as burger orphanages in Dutch towns usually applied strict admission conditions. Normally, only children who had lost both parents were admitted. Moreover, the parents had to have been legally recognized inhabitants of the town concerned. The two boys from Harlingen clearly did not meet these conditions.
The history and character of the Leeuwarden Burger Orphanage played an important role in their admission. The orphanage was founded in 1534 by Auck Peters, a wealthy woman from the Frisian capital. She stipulated that the institution should first and foremost provide shelter to her own blood relatives. Later benefactors also obtained rights to place relatives in the orphanage.(5)
The two places of Willem and Wobbe Benedictus were connected with Obbe Dircx and his daughter Tjeets who had made donations to the orphanage in the sixteenth century.(6) It is possible that the boys were descendants of these benefactors. But the conditions of donation also gave the orphanage board the capacity to admit other needy children at their discretion.

The Burger Orphanage in Leeuwarden did not only provide inmates with accommodation, clothing and food. Willem and Wobbe Benedictus also received an education and learned a trade so that after their stay in the orphanage they could stand on their own two feet. Learning a trade took place outside the walls of the orphanage.
Willem was apprenticed to a coppersmith in 1704. Wobbe was placed with tailor Gerrit Wighmans three years later. The tailor was located in the Kleine Hoogstraat in Leeuwarden, close to the orphanage. The apprenticeship with Gerrit Wighmans started on 1st April 1707 and lasted for two years. During the winter months the orphans were  allowed to attend evening school.(7)
Wobbe Benedictus left the Burger Orphanage in Leeuwarden in the summer of 1712. In the five years of his stay he had learned the trade of tailor from three different masters. But was it a good basis to earn his own living as a tailor? Maybe not. The only thing we know of Wobbe Benedictus after his orphanage period is that he served as a sailor on the frigate Huis te Warmelo. 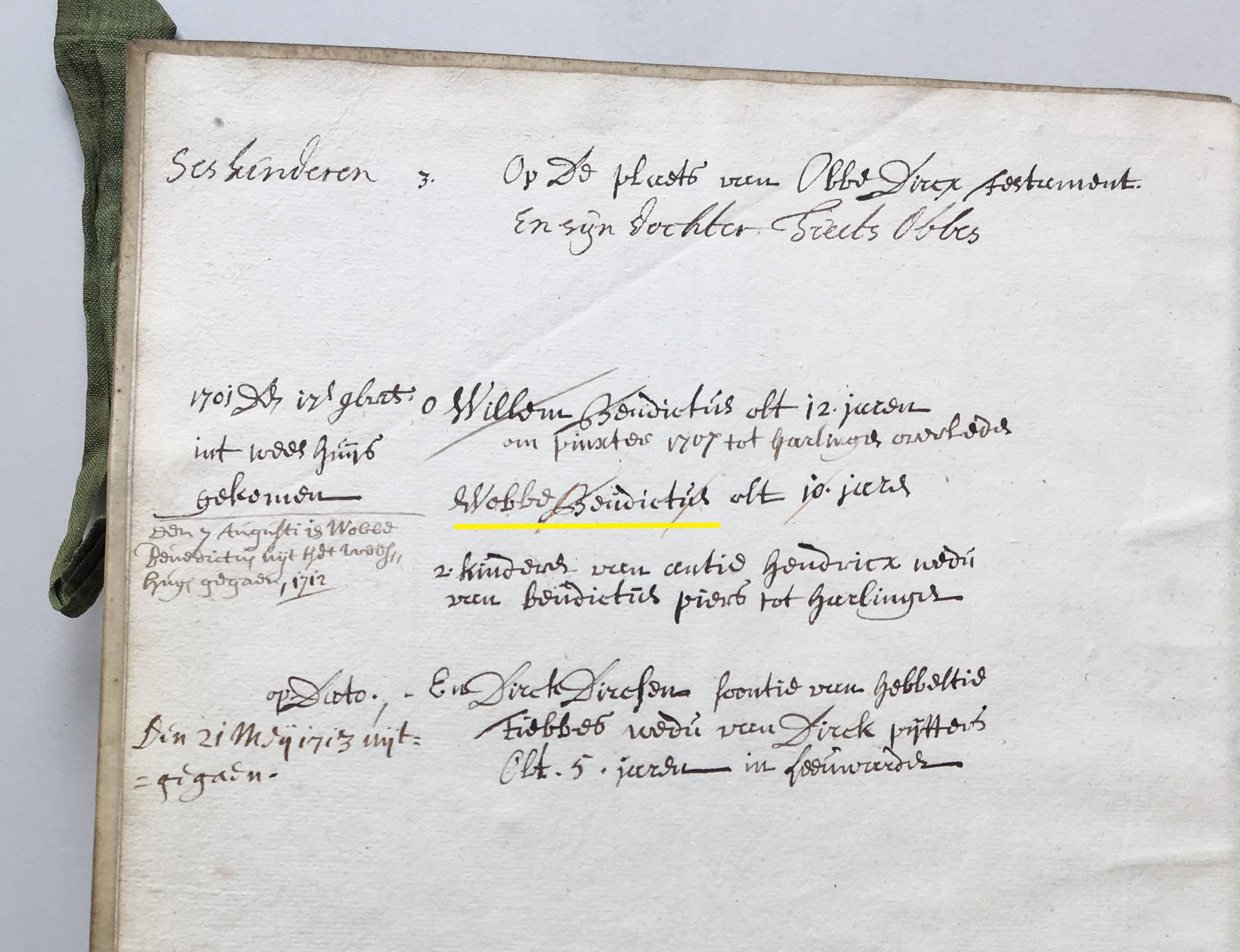 Figure: Registration of Wobbe Benedictus in the Burger Orphanage of Leeuwarden. The name of Willem Benedictus is above it, with the annotation that he died around Whitsun 1707 in Harlingen. (Historisch Centrum Leeuwarden)