In the collection of Teylers Museum in Haarlem there is a drawn ship portrait of the Zantvoort. This work of art has been attributed to Jan Claesz Rietschoof (1652-1719), an artist who lived and worked in Hoorn. Like the frigate Huis te Warmelo, the Zantvoort was laid down in 1708 by order of the Admiralty of West Frisia and the Northern Quarter. Until recently it was assumed that the Zantvoort was never in active service. But a document from 1718 sheds new light on the life course of this West Frisian warship, a life course that resembles that of the Huis te Warmelo.

The Zantvoort was built on the Oostereiland in Hoorn. Here the admiralty shipyard was situated in the eighteenth century. The warship was more than seven metres longer than the Huis te Warmelo and, with 64 guns, carried heavier armament . A ship of this size was classified as a third rate ship of the line, its firepower capable of battling an enemy fleet. The life course of the Zantvoort had an unfortunate start. When launched, the keel remained stuck in the harbour bottom which resulted in structural leakage. Despite attempts to repair the damage, pumping was necessary to keep the warship afloat. In 1717, some merchants made inquiries to the admiralty board about taking over one of its ships. The Zantvoort was one of the candidates then.(1)

The damage didn’t stop the Zantvoort from taking part in a mission to the Baltic region. This is evident from a list of ships in the archives of the Dutch province of Overijssel. The document from 1718 mentions three West Frisian warships that sailed to the Baltic Sea: the Huis te Neck, the Wolfswinkel and the Zantvoort.(2) The three ships were part of a squadron led by rear admiral Jacob van Coperen, which had to protect the Dutch trade interests in the region. The squadron’s equipment had taken a lot of effort. Initially it was proposed to send 30 ships, but due to lack of budget and resources only 12 warships were dispatched in the summer of 1718. In many ways the journey of the Zantvoort was a repeat of the journey that the frigate Huis te Warmelo had made three years earlier. However, unlike the Huis te Warmelo, the Zantvoort returned to its home port safely. In 1720, the admiralty sold the ship to the King of Spain. Shortly after, the Zantvoort ended up at a scrapyard in Southern Europe.

The drawing is a detailed and accurate representation of the Zantvoort. This is clearly visible in the way the artist has captured the masts and ropes. Rietschoof also did his best to show in detail the richly decorated stern of the warship. Between two rows of windows is the name of the ship with below the coat of arms of West Frisia. Above the ship’s name is a coat of arms with two crossed anchors, a symbol used by all Dutch admiralties. The stern of the frigate Huis te Warmelo, which lies in pieces at the bottom of the Gulf of Finland, probably had a similar design and decoration. That is why the drawing of the Zantvoort is a valuable source of information for the research in Finland.

Look here for an article (NL) about the Zantvoort in the quarterly magazine of the Hoorn historical society. 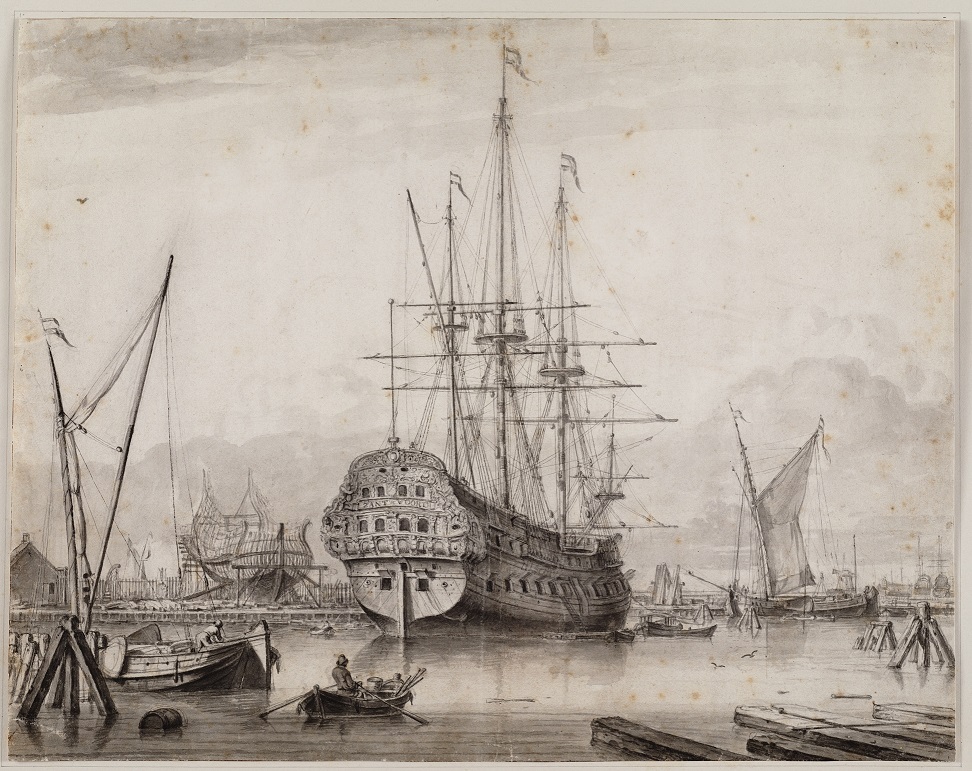 Figure: The Zantvoort at the admiralty shipyard in Hoorn. (Teylers Museum)