Jan Jansz Haanekraaij was a sailor on the frigate Huis in Warmelo. According to the payment register of the ship, he came from Enkhuizen. His unusual surname allows us toretrieve more information about him. How old was Jan when he left for the Baltic Sea region, was he married and did he have children?
The administration of another West Frisian warship, the Wolfswinkel, mentions his name. It says ‘Jan Hanekraaij’ from Enkhuizen, serving as a cook.(1) This entry from 1716 turns out to be a useful piece of the puzzle.

The search for sailor Jan Haanekraaij starts on the website of the West Frisian Archives. The index on baptismal, marriage, and burial registers contains some hits. For example, in 1647 a child of ‘Jan Hanecraeij’ was buried in the Enkhuizen West Church. Possibly the father of this child died in the same year because at the end of 1647 ‘Jan Dircksz Hanecraeij’ was given a final resting place in the same church.(2) Another Jan Haanekraaij died in 1684.(3) But all these deaths took place long before 1715 and cannot relate to sailor Jan Jansz Haanekraaij. In addition, the patronymics do not match.
The payment register of the warship Wolfswinkel from 1716 brings us one step further. It tells that the remaining wages of the ship’s cook Jan Hanekraaij were received by his son Teeuwes Jansz. This relationship between father and son leads to the couple Jan Teeuwesz and Antje Abrahams from Enkhuizen.

Teeuwes Jansz was a son of Jan Teeuwesz and Antje Abrahams. This couple married in 1686 in the Reformed Church. At that time Jan lived on the Noorder Havendijk. Antje married from the Oudevaersteijger, an alley nowadays called the Ooievaarsteeg.(4) According to the baptismal registers the Enkhuizen couple had ten children. Son Teeuwes was baptised on 26th July 1690.(5) None of the ten baptismal registrations mentions the surname of the father. This piece of information is also missing in the marriage declaration of Jan and Antje. Yet there are sufficient indications that Jan Teeuwesz was known as Jan Teeuwesz Haanekraaij.
What about Jan Jansz Haanekraaij, the sailor of the Huis te Warmelo? Jan Teeuwesz and Antje Abrahams also had a son Jan. He was baptised on 26th September 1691 and over a year younger than his brother Teeuwes. A confusing mistake was made when recording the baptism in the register. The father’s name is written as Jan Jansz!

The names of Jan Teeuwesz and Teeuwes Jansz Haanekraaij can also be found in the payment registers of the Dutch East India Company (VOC). In the period 1710-1725 father and son sailed to the East Indies several times. Father Jan Teeuwesz sailed out in 1710 with the ship Huis te Hemert on which he served as a ship’s cook. It’s the same position he had on the warship Wolfswinkel later.
Son Teeuwes left Enkhuizen in 1712 for a voyage to the East. He served as a ship corporal.
During their absence, the wages of both were partly paid to Antje Abrahams. Her signature, a double A, has been immortalized in the records of the VOC as well. Jan Teeuwesz made two voyages to the East Indies, son Teeuwes three. Both men died in Asia.(6)

What do we know now about sailor Jan Jansz Haanekraaij? He must have been a son of Jan Teeuwesz Haanekraaij and Antje Abrahams from Enkhuizen. The family was protestant and lived from seafaring. Both Jan’s father and his older brother served the Dutch East India Company. When Jan sailed out with the frigate Huis te Warmelo in 1715, he was 23 years old. At that time, his elder brother stayed in Asia. Archival records show no evidence that the sailor was married or had children. According to the payment register of the Huis te Warmelo, the remaining wages were collected by his father. Probably sailor Haanekraaij from Enkhuizen died on 25th August 1715 in the Gulf of Finland. 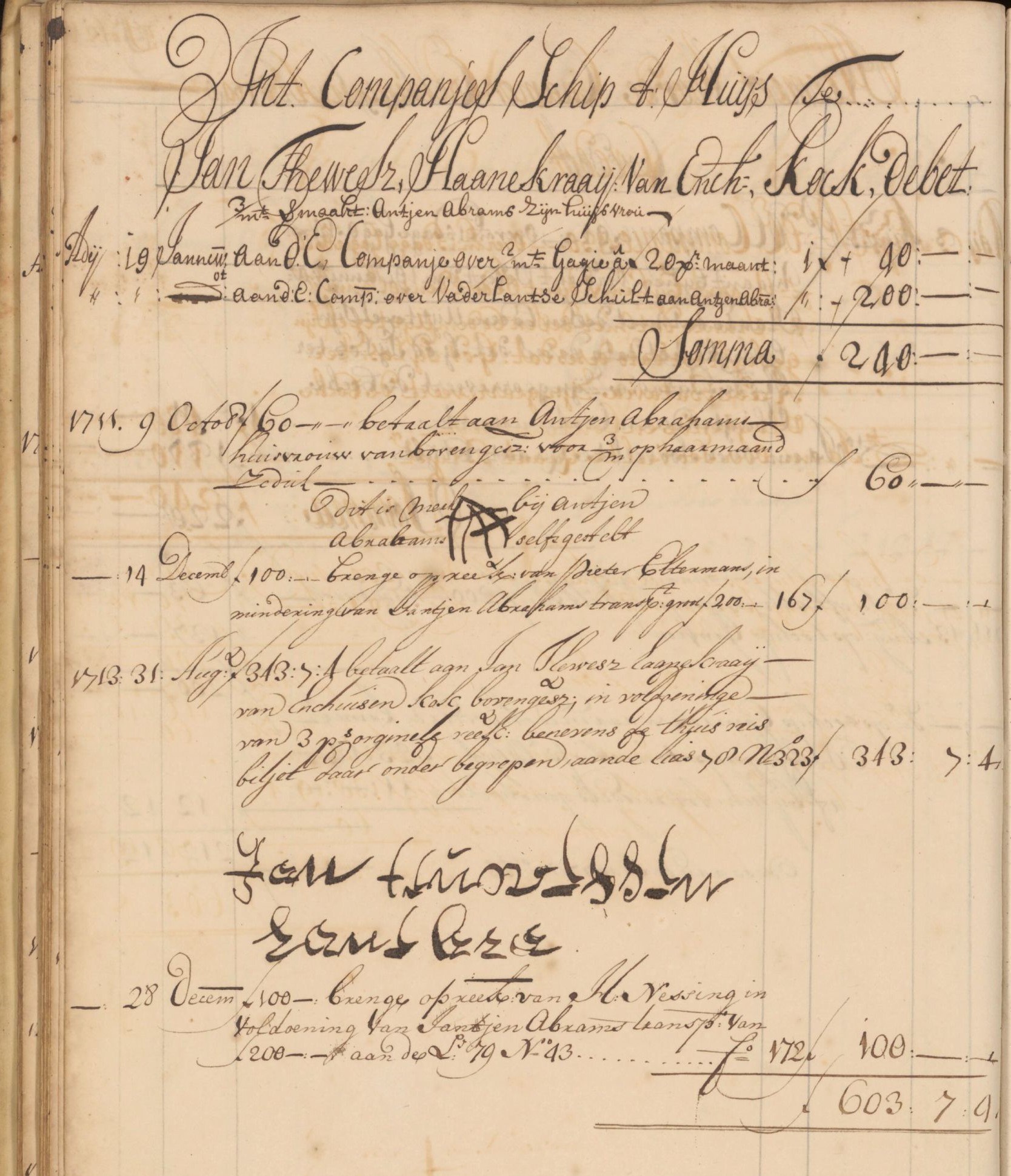 Figure: Page from the payment register of the VOC ship Huis te Hemert. The father of sailor Jan Jansz Haanekraaij served on this ship as a cook. The page shows the signatures of both parents: the double A of Antje Abrahams in the middle and Jan Teeuwesz Haanekraaij at the bottom. (Nationaal Archief)