On 20th May 1715, Jan Doen reported aboard the Huis te Warmelo. He was barely 15 years old, the son of a navy captain and lived in Hoorn. In the payment register Jan is mentioned as ‘volontair’, a title that can be translated best as trainee. According to regulations for Dutch naval officers from the mid-eighteenth century, trainees had to collaborate with the steersmen to get familiar with the steering of the ship.

Jan Doen was baptised in Hoorn on 16th May 1700 as son of Sijbrant Jansz Doen and Aagje Jans de Haan. His parents, both from Hoorn, were married two years earlier. Jan was the second child from this marriage. The first child, of which no baptism record has been traced, was buried on 9th June 1699 in the Great Church in Hoorn. After Jan seven more children followed, most of whom died at a very young age. Only sister Sijtje reached adulthood. Sijbrant, a brother of Jan Doen, was no older than 8 years old. He was given a final resting place in the Great Church on 14th August 1715. At that time Jan sailed in the Gulf of Finland.

A family of seafarers

The Doen family from Hoorn has produced many seafarers, starting with Jan Sijbrantsz Doen. He was the grandfather of trainee Jan Doen after whom he was most likely named. Jan Sijbrantsz was skipper and made a return voyage to Batavia employed by the Dutch East India Company (VOC) in the years 1672-1676. In the same year of his return, he sailed out for the East Indies again. However on this second voyage he passed away. His son Baltus followed in his fathers footsteps as a VOC-skipper. His son Sijbrant, the father of Jan Doen, also led a seafaring life. In 1705, Sijbrant Jansz Doen was appointed as navy captain of the Admiralty of West Friesland and the Northern Quarter and subsequently commanded the warships Wapen van Utrecht (1706-1707) and Wapen van Deventer (1709).

In 1714 captain Sijbrant Jansz Doen took his son Jan on a voyage with the warship Huis te Neck. It is not known what rank or position the 14-year-old boy held. A written statement made by clerk Hendrik Semeijn before a notary shows that father and son were involved in an incident on this voyage. Semeijn stated that he was threatened by Jan Doen when the captain’s son took up a pair of scissors to cut clerk’s hair. Hendrik Semeijn resisted and struck the boy. Jan Doen took another blow from the clerk when the boy had the gall to draw a knife. After the quarrel between the captain’s son and the clerk, captain Sijbrant Jansz Doen appeared on the scene. According to the statement, he took against Hendrik Semeijn saying: ‘dog, what’s to prevent me from breaking your neck?’ Then the captain kicked the clerk off the chest on which he was sitting. There may have been drinking involved. Prior to the incident, Semeijn had refused to drink wine after a meal in the captain’s cabin, despite the captain’s strong insistence.(1)

Jan Doen, the captain’s son, survived the wreckage of the frigate Huis te Warmelo. A notarial deed from 1720 mentions Jan Doen as a steersman on the Huis te Neck, a familiar ship to him. In the following year Jan Doen switched to the VOC and sailed to Batavia as third steersman on the ship Wassenaar. Sadly, his ship the Huis te Foreest was wrecked in 1722 on its return voyage near Mauritius, and he perished in the wreckage. Jan Doen was 21 years old and died unmarried. As his next of kin, his parents Sijbrant Jansz Doen and Aagje Jans de Haan received his remaining wages. 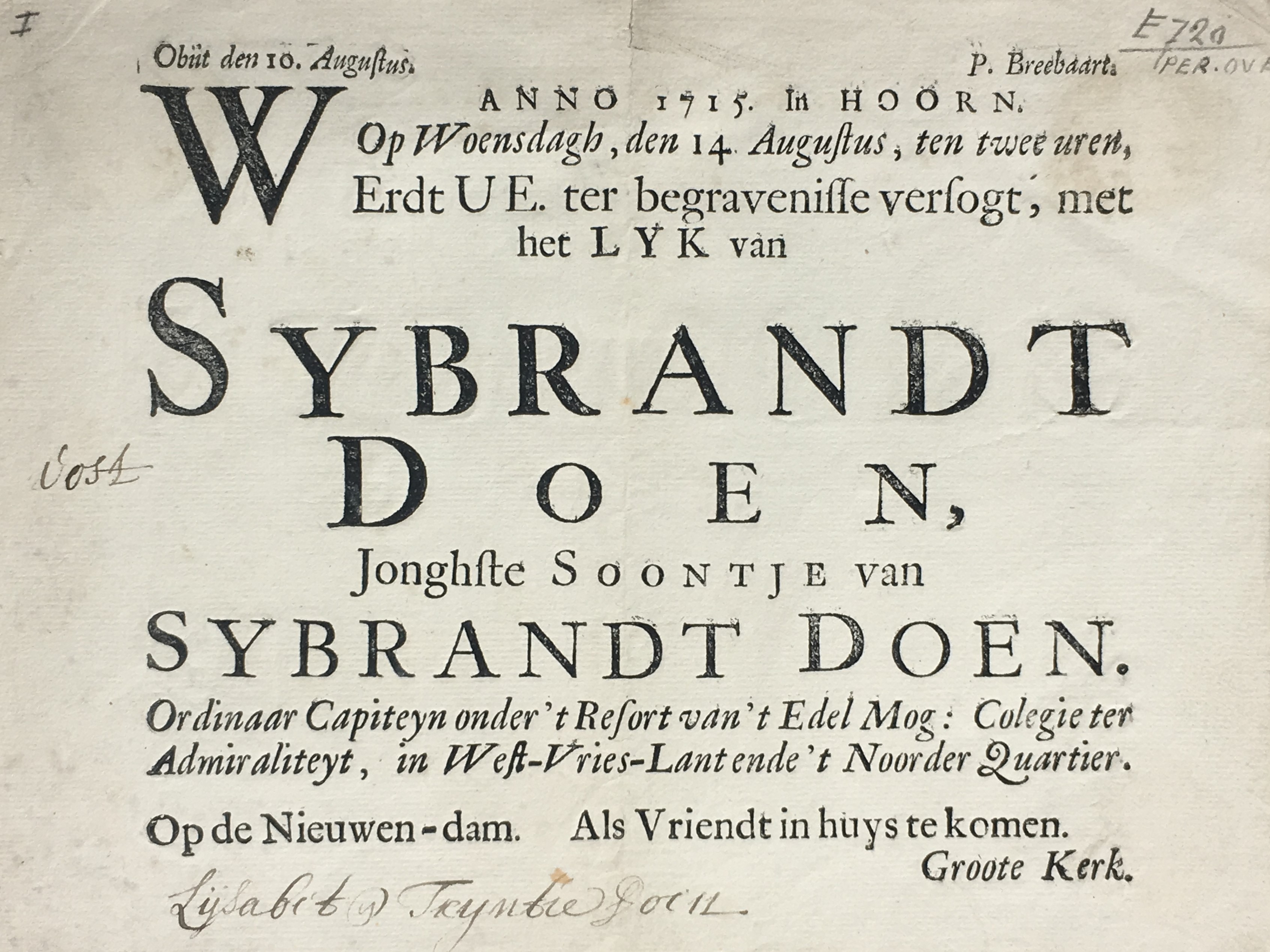