You will find the names of those on board the Huis te Warmelo in baptismal and marriage registers, notarial deeds and court documents. But they can also occur in other, less obvious sources. In the archives of the Dutch town of Medemblik, the names of first skipper Claas Heddesz and boatswain Broer Jansz are listed on three invoices from the years 1709-1713.(1) The invoices were paid for ringing the town bells and firing cannons when Medemblik citizens celebrated days of prayer.

In times of war the Dutch government regularly proclaimed national days of prayer. On these days the course of battle was remembered and people prayed for the blessing and help of God. To emphasize the special character, a day of prayer was usually held on a weekday, which the government designated a day of rest.
The days of prayer in the years 1709-1713 were related to the War of the Spanish Succession. In this war an alliance of European powers, including the Netherlands, were fighting the French. The newspaper Oprechte Haerlemsche Courant reported on the day of prayer in The Hague on 13th November 1709. In the morning, after the church services, a parade with captured banners and standards was held around the Binnenhof. From 4 pm to 8.30 pm cannons were fired every half hour while bells were ringing. The States of Holland and the representatives of the Dutch admiralties didn’t hold meetings that day.(2)

Bells and cannons in Medemblik

On days of prayer, Medemblik rang the bells of the great tower, the Oostertoren and the town hall. The three bells in the great tower or Bonifacius tower were operated by six ordinary bell ringers plus 12 extra men, who worked in alternating shifts. The Oostertoren, a tower of Radboud Castle, had only one bell that was operated by four men.
For the salvos the cannons in the Klaphuis and at Ruitenburg were used. Today these are unknown place names in Medemblik. However, in the beginning of the eighteenth century all citizens knew these places. The Klaphuis was a building between the entrances to the Oude Haven and the Oosterhaven. The cannons stood in or next to the building, guarding the harbour entrances. Firing cannons sometimes caused glass damage to houses and complaints from neighbours. In 1749, houses along the Oosterhaven shook to such an extent that residents even feared collapse.(3) The cannons on Ruitenburg served to defend the town on the landward side. Ruitenburg was the southern end of the Turfhoek, near the Keernder town gate.

The three invoices show that days of prayer were held in Medemblik on 13th November 1709, 3rd December 1710 and 14th June 1713. On the latter date the end of the war was celebrated. Each invoice contains the names of about 50 men. They all received one guilder each for services rendered. Broer Jansz and Claas Heddesz were present at the artillery at Ruitenburg on all three days of prayer. Therefore these two crew members of the Huis te Warmelo had relevant weapons knowledge and experience. No family names of Broer Jansz and Claas Heddesz are known. Presumably the combination of their first name and patronymic was sufficiently distinctive in Medemblik. According to entries in the Reformed baptismal registers, Claas Heddesz was baptised on 16th May 1677 and Broer Jansz on 10th August 1661. When they left for the Baltic region in 1715, they must have been 38 and 53 years old respectively.

Listen and look here for the bells of the Bonifacius tower that were rung on the days of prayer. 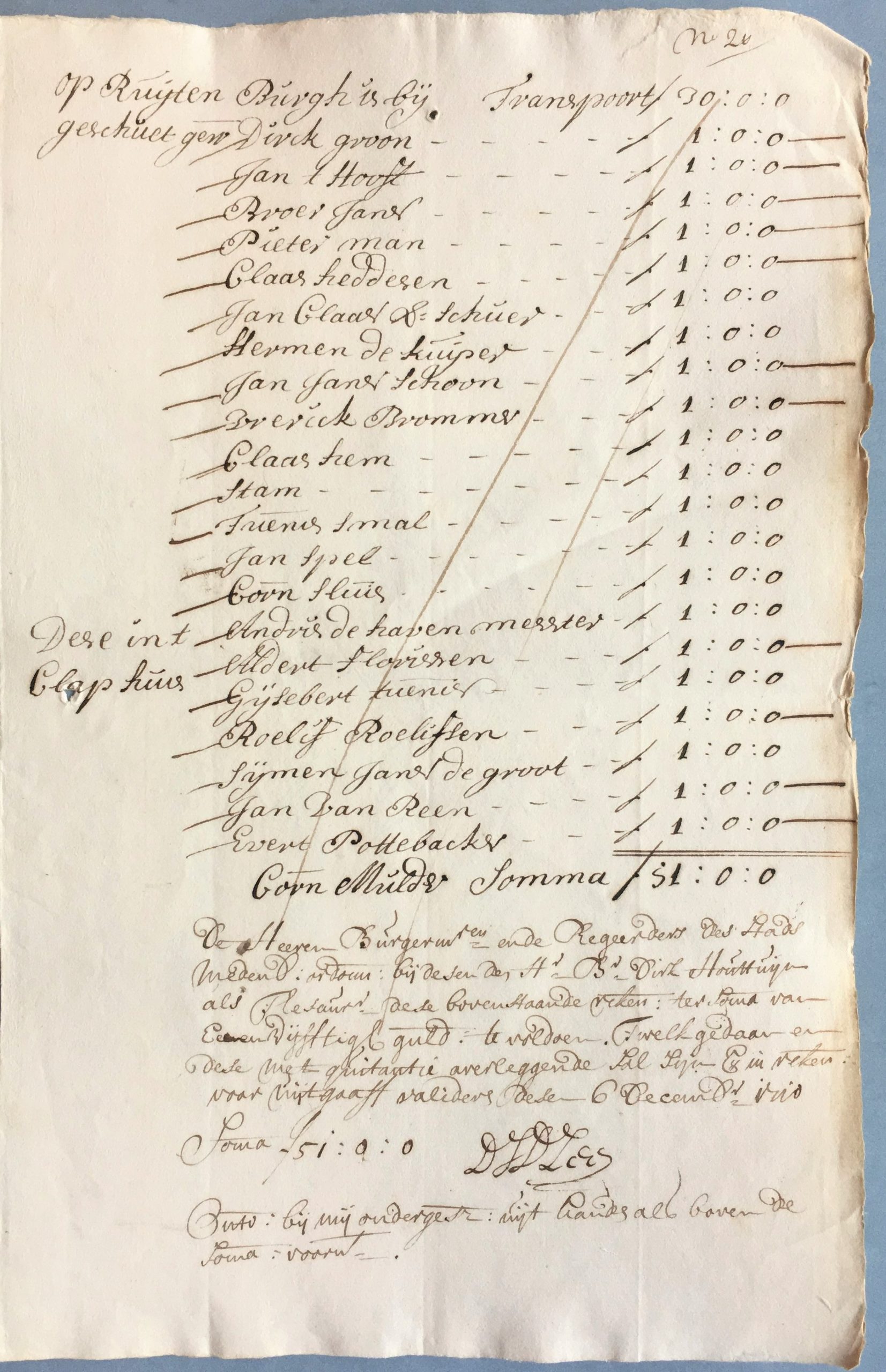 Figure: Invoice with the names of men who had been at the artillery at Ruitenburg and in the Klaphuis on 3rd December 1710. The third and fifth names from above: Broer Jansz and Claas Heddesz. (Westfries Archief)