Our man in Russia

In 1715, Jacob de Bie was the diplomatic representative of the Netherlands in Russia. He lived and worked in Saint Petersburg, the city that was founded by Tsar Peter the Great twelve years earlier. Jacob de Bie wrote weekly letters to The Hague to inform the States General about actual developments. One of his letters mentions the loss of the frigate Huis te Warmelo. Who was this diplomat and what did he write about the accident in the Gulf of Finland?

Jacob de Bie was appointed resident in Moscow by the States General in 1711. It soon became clear that Saint Petersburg instead of Moscow would be his place of employment. The relocation of the government center by Tsar Peter the Great had not yet reached The Hague. Early 1712, the diplomat arrived in Saint Petersburg from where he had to serve the Dutch interests in Russia.
Born in Nantes in 1681, Jacob de Bie was still young and at the start of his career as a diplomat. Although he showed great zeal, the Calvinist official did not seem a good match with the mores of the Russian court and its servants. The circumstances in which he had to operate were difficult. Russia was at war with Sweden and was rapidly developing into a major European power.(1)

Jacob de Bie’s letters from August 1715 give a picture of the matters that occupied him. For example, he wrote about the problems faced by Dutch merchants and skippers in Arkhangelsk. Despite agreements, they had to pay high tolls and Dutch sailors were secretly recruited for the Russian war fleet.
Jacob de Bie also reported on Russian troop and fleet movements and informed The Hague about the Anglo-Dutch convoy in the Gulf of Finland, of which the frigate Huis te Warmelo was part. The letters make clear that the convoy was experiencing delays. In Tallinn a lack of means of transportation made unloading and loading of the merchantmen difficult. This shortage was a direct result of the war. Nor did the loading of the merchantmen go smoothly in Saint Petersburg. On 16th August, Jacob de Bie wrote that some ships had not yet taken half of their cargo while the convoy was due to depart in a few days. The bad weather made loading flax and hemp impossible. In the end, the ships in Saint Petersburg were able to take their full load because a westerly headwind prevented them from sailing out.(2)

In his letter of 23rd August 1715, Jacob de Bie reported that all English and Dutch merchantmen from Saint Petersburg had left for the fortress of Kroonslot. (3) Kroonslot is located on Kotlin, an island off the coast of the Russian city. From there the ships would sail towards Tallinn. To protect the convoy, the Huis te Warmelo and three other warships awaited the merchantmen at Hogland Island, halfway between Saint Petersburg and Tallinn.
The diplomat reported about the wreckage of the frigate Huis te Warmelo: ‘Your high mightinesses’s ship, commanded by Captain de Groot, had the accident of hitting a rock between Hogland and Kockrar and being wrecked. Seventy men had arrived at Reval, but the captain with the other officers and sailors had been lost. It is the same rock, that Lord Vice Admiral Cruijs hit two years ago and on which Captain Commander Scheltinga lost his ship.’(4) So according to De Bie, the dangerous rock had caused shipwreck and damage before. Cruys and Scheltinga were Dutch officers in Russian service. In a failed chase of a Swedish squadron in 1713, their ships ran aground. The Russian warship Vyborg, commanded by Scheltinga, was lost. Unlike the Huis te Warmelo, the Vyborg didn’t sink to the bottom of the Gulf of Finland. Instead, the stranded ship was set on fire by the Russians to prevent it from falling into enemy hands.(5)

The 1713 incident had serious consequences for Vice Admiral Cornelis Cruys, founder of the Russian navy. He was sent to Siberia for dereliction of duty. After a year’s exile he was taken back by Peter the Great and restored to his rank.
Jacob de Bie also came into conflict with the tsar. In 1718, the diplomat was summoned after he had informed The Hague about rumors that Peter the Great was involved in the death of Crown Prince Alexei. Suspected of conspiracy against the tsar, he was interrogated and Russian soldiers and officials ransacked his home in Saint Petersburg. State security took precedence over diplomatic immunity. Jacob de Bie’s untenable position led to his departure from Russia.
In November 1719 he traveled back to the Netherlands by sea. This ship voyage ended in a beaching on the Danish coast. Jacob de Bie, his wife, his secretary and four household staff were sadly killed in this shipwreck.(6) 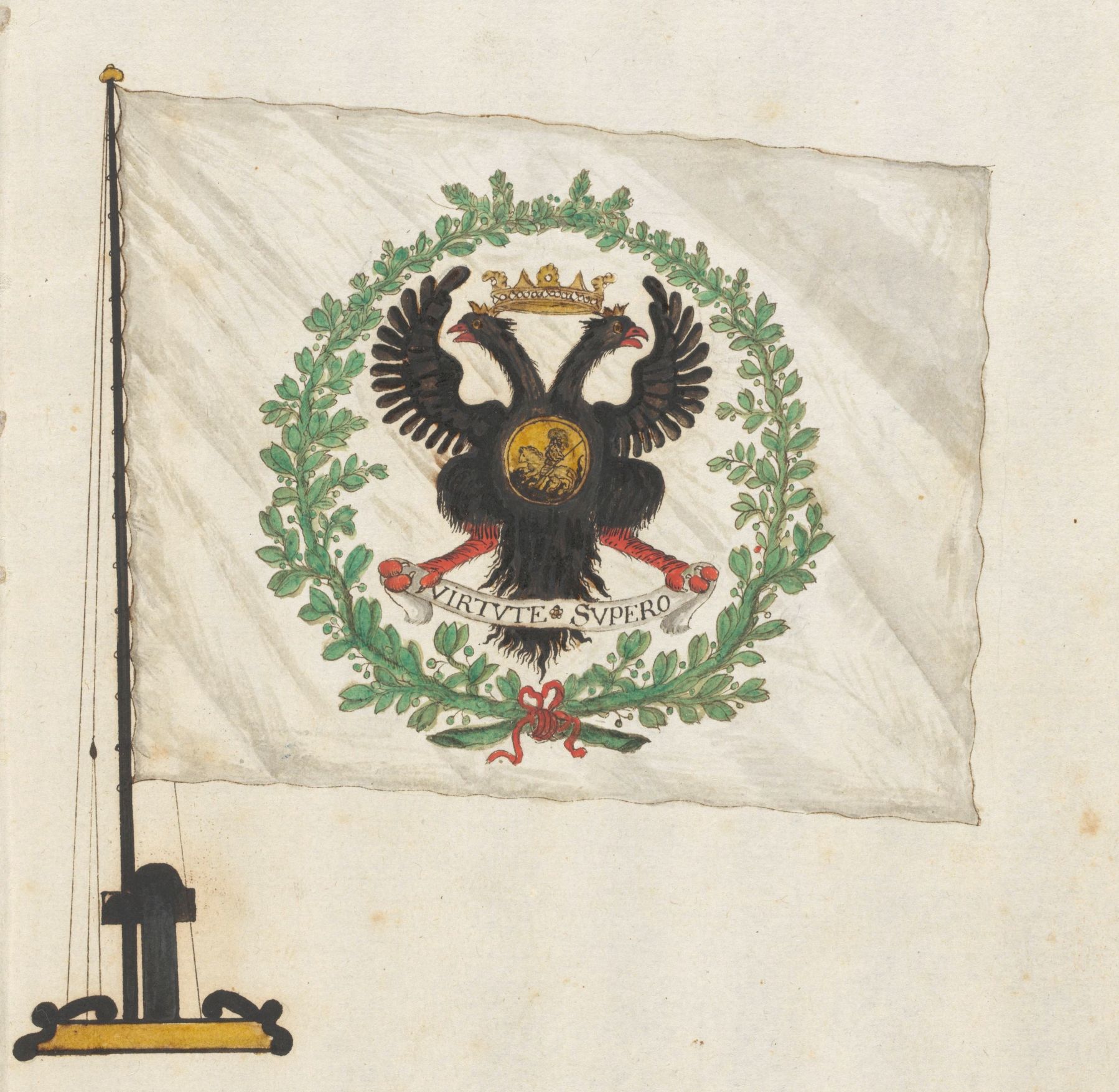 Figure: Flag of the Russian Empire, drawn around 1670. (Rijksmuseum)