Pieter Groenebroek was second lieutenant on the frigate Huis te Warmelo. He came from Medemblik. His name recently surfaced in a deed from an Amsterdam notary. The notarial deed shows that he was already sailing in the Baltic Sea area in 1689. That is more than 25 years before his journey with the Huis te Warmelo. According to the deed Pieter Groenebroek was also confronted with heavy weather at sea at that time, but the incident ended better than his later voyage.

A post about the family and Pieter Groenebroek appeared earlier. The unusual surname originated in the Dutch town of Medemblik, where the ancestor ran a cloth shop by the name of Groenebroek (green trousers). Two people with the name Pieter Groenebroek lived in Medemblik: Pieter Jorisz and the younger Pieter Marcusz. They were uncle and cousin.
Pieter Jorisz Groenebroek was almost certainly the crew member of the frigate Huis te Warmelo. His wife is mentioned as the beneficiary in the payment register. Moreover, in 1715 his cousin was no longer living in Medemblik. In 1710 Pieter Marcusz married in the Dutch village of Schermerhorn, where he also settled.(1) Would he then still be recorded as ‘Pieter Groenebroek from Medemblik’ in the payment register of the Huis te Warmelo five years later?

Bad weather in the Baltic Sea

On 4th April 1690 Pieter Jorisz Groenebroek visited the office of the notary Simon van Sevenhoven in Amsterdam.(2) Together with Tjalke Sijmons and Sijmon Cornelisz he made a statement about a ship journey. The three men had sailed on the ship de Parelkerk of the Terschelling skipper Dirk Adriaansz. What was the case?
In November 1689 they had loaded rye, wheat and barley into their ship in the Gdansk roads. On the return journey to Amsterdam they encountered bad weather. Stormy winds pushed the Parelkerk towards the shore. In order to get away from the shore, they set as many sails as possible. This gave the ship more forward speed and prevented it from running aground. But there was a price to pay for this manoeuvre. Both the ship and the cargo were damaged. In the notarial deed Pieter Jorisz Groenebroek and his two fellow sailors declared that their ship was badly damaged and that the seawater had penetrated everywhere.
The damage meant financial costs for the owners of the ship and the cargo. How the costs would be shared depended on the circumstances. The notarial deed had to prove that the damage was not the fault of the ship and its crew.

The Amsterdam notarial deed from 1690 teaches us that the lieutenant of the Huis te Warmelo must have been an experienced sailor. Pieter Jorisz Groenebroek sailed on the Parelkerk as high boatswain. The high boatswain supervised the sailors and was ranked below skipper and steersman. He himself must have started out as a sailor or ship’s boy. In 1689 skipper Dirk Adriaansz made two voyages to Gdansk.(3) It is likely that Pieter Jorisz Groenebroek sailed with him on both voyages.
The deed lists the sailor from Medemblik as Pieter Jorisz from Medemblik. His signature at the bottom of the document contains his surname as well as his first name and patronymic. The clearly legible signature is an indication that he could read and write.
According to the document, Pieter Jorisz Groenebroek was 36 years old, but that does not match exactly with his baptismal entry. He was baptised in Medemblik on 18th September 1652 and must have been a year older at the time of the notary visit.(4)

The Amsterdam City Archives manage an enormous collection of notarial deeds. The collection covers 3,500 running metres in archive cabinets and includes millions of records.
Amsterdam was an important international centre of trade and shipping, where many ship owners and charterers lived. Supply and demand came together in the city. The business contracts and declarations in the notarial archives reflect this position of Amsterdam.
Under the project name All Amsterdam Deeds, millions of notarial deeds are scanned and indexed by volunteers for personal names and other data. This way, deed by deed is made accessible. The results so far can be searched on the website of the Amsterdam City Archives. Here you will also find the name of Pieter Jorisz Groenebroek and the corresponding notarial deed. Hopefully, in the future more of the crew members of the Huis te Warmelo will turn up in Amsterdam deeds! 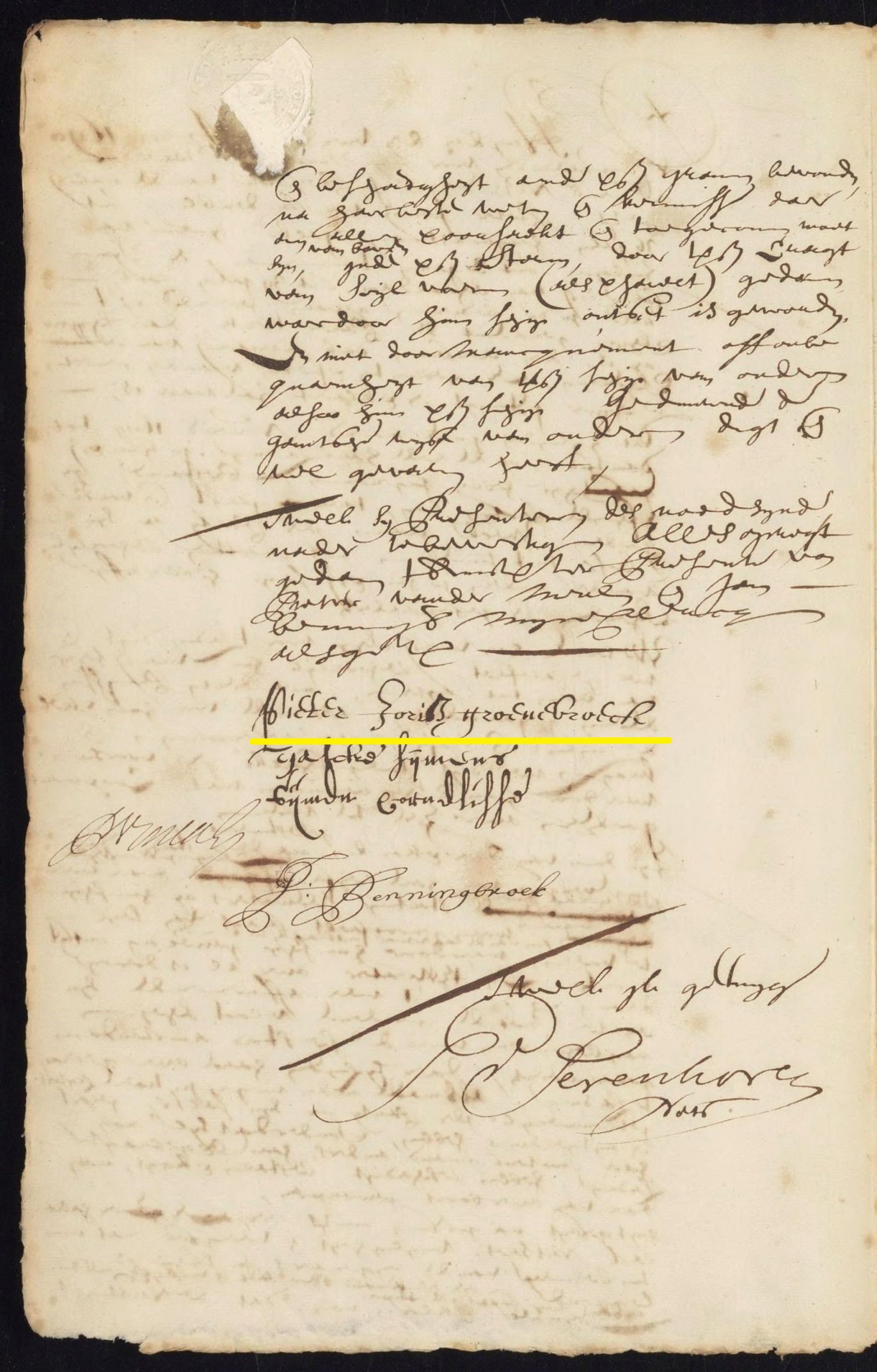 Figure: Last page of the notarial deed from Amsterdam. This bears the signature of Pieter Jorisz Groenebroek. (Stadsarchief Amsterdam)