The Groenebroek family from Medemblik

Pieter Groenebroek from Medemblik was second lieutenant on the frigate Huis in Warmelo. In rank he came after the captain and the first lieutenant. Groenebroek was once a well-known family name in Medemblik. At the beginning of the eighteenth century, two people by the name of Pieter Groenebroek lived in the port town.

The surname Groenebroek is derived from a house name and cloth shop that ancestor Joris Pietersz bought in 1641. In 1722, this house at the Oosterhaven in Medemblik was still known as de Groenebroek (green trousers). Joris Pietersz Groenebroek married vicar’s daughter Susanna Boerhave, a relative of the famous Dutch scientist Herman Boerhave. Joris and Susanna had several children among whom son Pieter, baptised in Medemblik in 1652, and son Marcus.

Pieter the Elder and the Younger

Who is the lieutenant of the Huis te Warmelo?

Pieter Groenebroek the Elder is probably our man as his wife Aaltje Jans Pick, with whom he had been married since 1675, is mentioned in the administration of the wrecked ship. The Admiralty paid her the remaining wages, not only from second lieutenant Pieter Groenebroek but also from a number of other crew members. Nevertheless, more evidence for the identification of the lieutenant from Medemblik is welcome.

Do you know more about the Groenebroek family from Medemblik and its descendants? 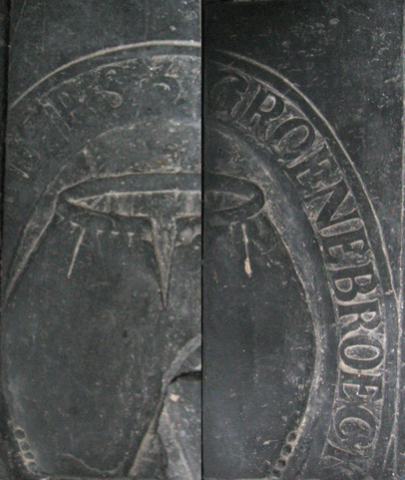 Figure: Composite picture of the tombstone of founding father Joris Pietersz Groenebroek. The stone is in pieces in the St. Boniface church in Medemblik. (D. Meijers)