Blom is a common family name in the Netherlands. The name has the same meaning as bloem (flower). Two crew members of the frigate Huis te Warmelo bore this surname: third carpenter Tijs Cornelisz Blom and sailor Jan Blom. Both men came from Alkmaar. No clear trace of Jan Blom has been found in the archives. Around 1715 several men with this name lived in Alkmaar. It is different with Tijs Cornelisz Blom. We now know more about this crew member.

Tijs Cornelisz Blom was baptised on 3rd April 1675 in the Great Church of Alkmaar. He was the second child from the marriage of Cornelis Tijsz Blom and Anna Gerrits. The parents of Tijs had married a year and a half earlier in the same church.(1)
In 1702, at the age of 27, the third carpenter of the Huis te Warmelo married himself. At that time he lived in the Sackestraat in Alkmaar. His wife Marijtje Gerrits Stortenbeecker also lived in Alkmaar, but was originally from Rotterdam. Bride and groom did not have to pay tax on marriage because they fell into the category of impecunious.(2) Tijs Cornelisz Blom and Marijtje Gerrits had two daughters: Antje and Hestertje. Just like their father they were baptised Reformed in the Great Church of Alkmaar.(3)

From 1712 onwards Tijs Cornelisz Blom paid tax on a small house in Sackestraat. It is possible that he already occupied this house at the time of his marriage. The house is described as a room and stood on the west side of the street. Although his name appears in a property tax register, Tijs Blom was not the owner. The house was bought in 1712 by Lodewijk Fontijn, who paid the modest sum of 2 guilders. Fontijn was a blood relative of Marijtje Gerrits.(4)
On a contemporary map of the town of Alkmaar, you will search in vain for Sackestraat or Zakkenstraat. The street is now called Bloemstraat (Flower Street). This name change came about in the nineteenth century at the request of the residents. They wanted a nicer name for their street, a wish that the town council of Alkmaar agreed to in 1887.(5) The street name is an unintentional reminder of former resident Tijs Cornelisz Blom.

On 18th October 1716 Marijtje Gerrits remarried Harmen Dirksz Meuleman.(6) The bride was a widow, the groom a young man from Osnabrück. The wedding date makes it likely that Tijs Cornelisz Blom did not return from his voyage to the Baltic. Compared to her first marriage the financial position of Marijtje Gerrits in 1716 had not changed significantly. This marriage also fell into the category of impecunious.(7)
The house in Sackestraat was sold by Harmen Meuleman in February 1725. Marijtje had obtained this property by inheritance. She was the only heir of Lodewijk Fontijn. Marijtje Gerrits herself died three years later.(8)
Little is known about the fate of the children of Marijtje Gerrits and Tijs Cornelisz Blom. The baptismal, marriage and burial registers of Alkmaar only mention the marriage of Hester Blom. She married Jacob van der Wegen on 18th March 1725. 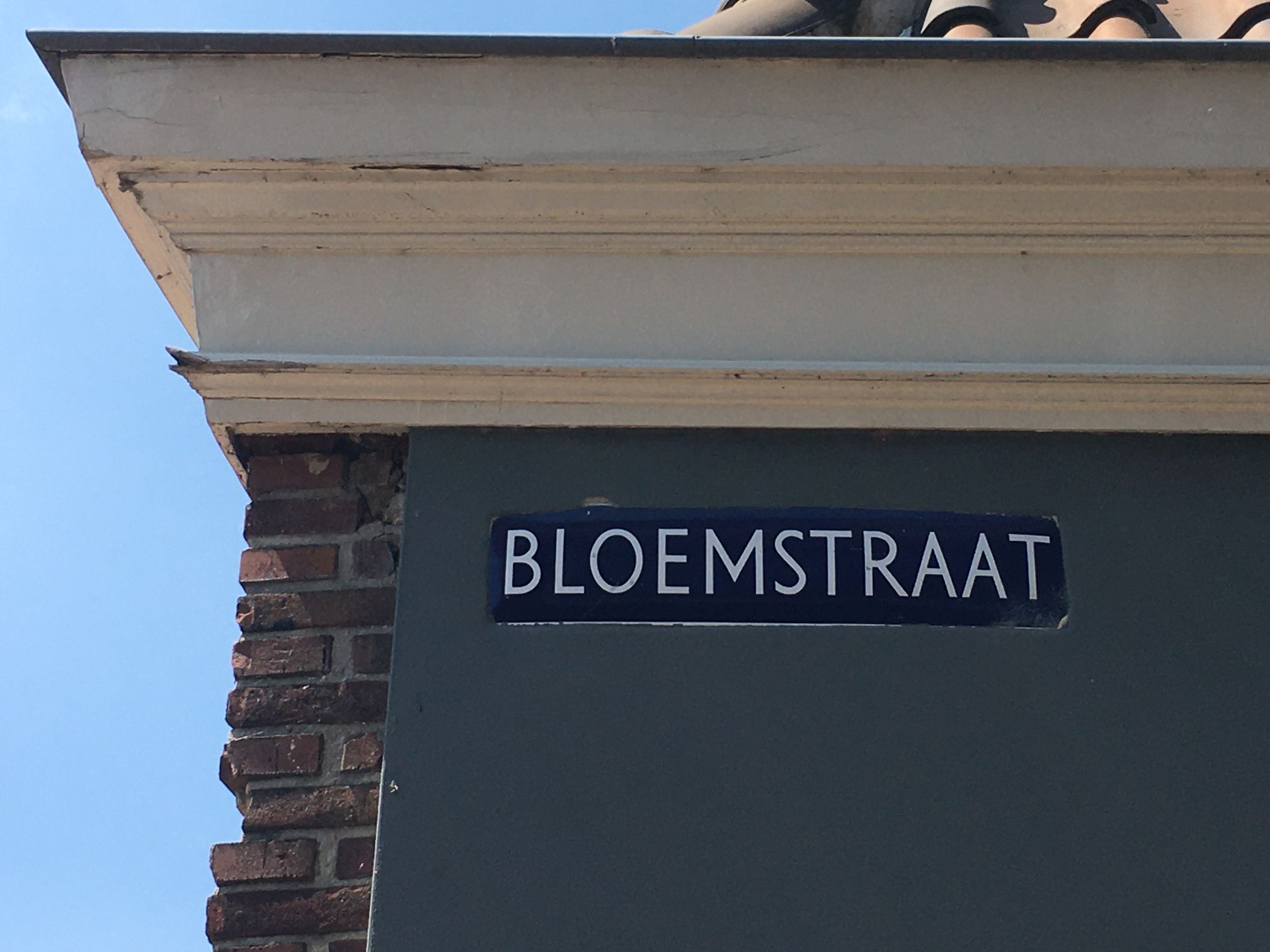 Figure: Street sign at the corner of Oudegracht-Bloemstraat in 2021.