There are descendants of several crew members of the frigate Huis te Warmelo. One of them is 78-year-old Frank de Boer from the Dutch village of Koog aan de Zaan. He is a descendant of Weijert Jacobsz Groen, who served on the warship as provost. Frank had already mapped out the relationship with this distant ancestor himself as genealogy is one of his hobbies. But the fact his ancestor sailed on a man-of-war in the Gulf of Finland in 1715 was something new to him.

Weijert was baptised on 20th March 1678 as the son of Jacob Weijertsz Groen and Aafje Davids. Weijert’s parents were unmarried at that time and married five months after the baptism. The marriage registers mention that they were ‘young people from Medenblick’.(1)
When Weijert was seven years old his widowed mother remarried Jan Jacobsz Noorderpoort. This union gave Weijert two half-sisters.(2)
Weijert Jacobsz Groen was married around the time of his 27th birthday. With his wife Jannetje Barents he had five children. The youngest child was baptised on 11th February 1717 in Medemblik.(3) This date indicates that Weijert Jacobsz Groen was a survivor of the shipwreck in the Gulf of Finland. Apart from the marriage and baptismal records, the archives have not yet revealed any other traces of Weijert.

As provost Weijert Jacobsz Groen had a special position on the frigate Huis te Warmelo. He was charged with maintaining order and discipline on board. The provost ensured that the crew behaved according to the rules and kept their accommodation clean. An instruction for the provost from the mid-eighteenth century tells the cleaning of the lower deck accommodation was a daily activity. In order to reach every spot with broom and scraper, the seaman’s chests were moved whenever the occasion arose. In the evening, the provost set the guard and had to supervise the sailors to ensure that they did not stay up drinking and gambling with  dice.(4)
The provost also had to report violence  and disorder among the crew to the ship’s command so that the chief officers could intervene and bring the culprits to justice. He also had a role in the execution of punishments, collected fines, and was responsible overseeing prisoners.
As a symbol of authority, the provost carried a staff. He used the staff to beat the mast or the stairs to the lower deck to remind the sailors of the rules.

Two daughters of Weijert Jacobsz Groen and Jannetje Barents reached adulthood, were  married, and provided offspring. Their names are Aafje and Grietje Weijerts.
Frank de Boer is a descendant of Aafje, the provost’s eldest child. She married Pieter Jansz Lintel in 1731 and settled on the island of Wieringen, the residence of the groom where their first children were baptised.(5) Five years later the young family moved to Medemblik where Pieter Jansz Lintel bought a house on the Westerhaven.(6)
The surname Lintel bears several variants of the name including Linteloo and Lindeloo, with double or single o. Although all name variants occur among the descendants of Pieter Jansz Lintel and Grietje Weijerts, the spelling Lindeloo is dominant.
It is quite possible that Pieter Jansz Lintel was a seafarer. The seafaring was omnipresent in both Wieringen and in Medemblik where many inhabitants earned their living on a ship. A grandson of Pieter Jansz Lintel is known to have signed on with a VOC ship in 1792.(7) Two great grandsons, Wijert Hendriksz Lindeloo and his brother Pieter, were also seafarers at the beginning of the 19th century.(8)

Through Wijert Hendriksz Lindeloo (1788-1845), who was skipper and merchant in Medemblik, we come to Frank de Boer from Koog aan de Zaan. Wijert’s daughter Maartje Lindeloo married Reijerus Nicolaas de Boer in 1849. He was the tax collector in Medemblik and clerk at the district court. The marriage of his daughter indicates that Wijert had achieved a certain level of prosperity.
The De Boer-Lindeloo family produced several notaries. Between 1891 and 1957, three successive descendants held the office of notary in the village of Hoogwoud. Frank’s father was also a notary. He first worked as a candidate-notary in Hoogwoud, l was later appointed a notary in Schagen.(9)
Frank de Boer is the eighth generation after Weijert Jacobsz Groen. Of course there is no living memory of the provost of the Huis te Warmelo. However in the De Boer family the name W(e)ijert is still present today! 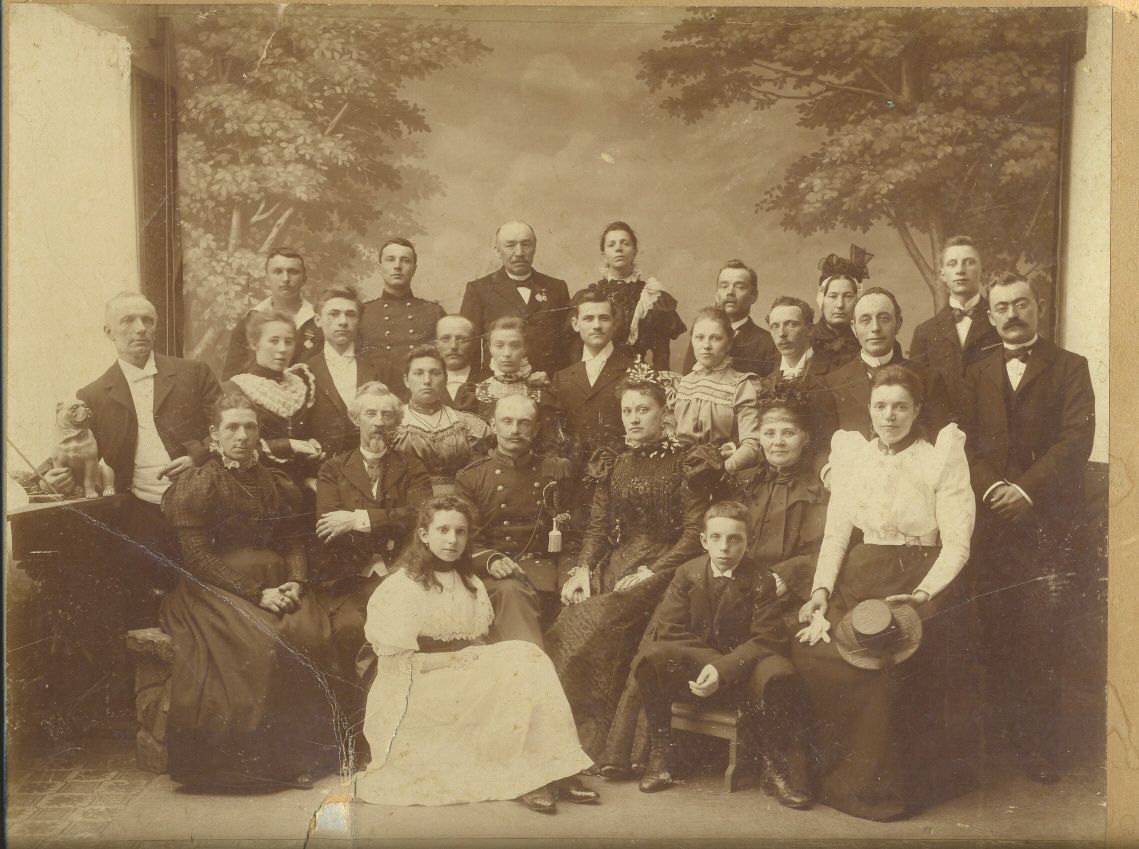 Figure: A family portrait of Reijerus Nicolaas de Boer and Maartje Lindeloo. The photo was taken in 1899 on the occasion of their 50th wedding anniversary. (Frank de Boer)

With thanks to Frank de Boer from Koog aan de Zaan and Linda Roos, staff member of the Westfries Archief.